Microsoft Office releases before Office 2013 are now too old to be used safely and should not be installed on your PC.  None of these old versions are supported by Microsoft:

Microsoft Office releases after Office 2010 are still OK to use and continue to receive security updates:

Microsoft Windows released before Windows 8.1 are now too old to be used safely and should not be installed on your PC.  None of these old versions are supported by Microsoft:

Microsoft Windows Windows 8.1 and Windows 10 are still OK to use and continue to receive security updates:

Windows 10 is typically updated with big upgrades twice a year (each spring and autumn).  Each of the major release of Windows 10 is supported for 18 months after its release, so you must make sure that you have a current version of Windows 10 installed because some are already too old and are no longer supported.

CrashPlan Home, the free software which used to allow you to backup your PC to an external hard drive or USB flash drive, or to another PC was withdrawn in October 2018.  It won’t be working any more, even if it used to work.  I sometimes see it still installed on PCs and people think that it is protecting them.  It isn’t!  Consider switching to Backblaze.

Which version of Windows do you have?

To identify which version of Windows you’re using, press Win + R and then type winver and press Enter

(The Win key is at the bottom left corner: it might say “Win” on it, but probably just has the Windows flag logo. It will be between the Control and Alt keys) 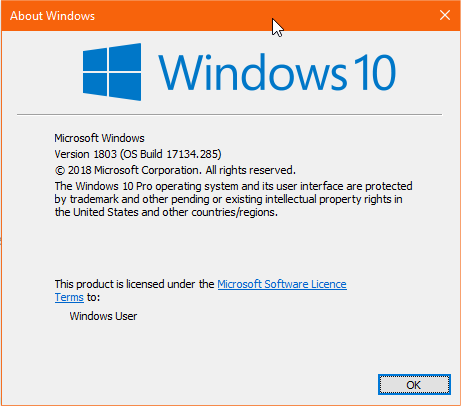 In the screenshot above, the PC is using version 1803 of Windows 10.  If you’re using such an old version of Windows 10 today, you need to get it updated to a version which is still supported (see the table above).