NOTE: This page has not been updated since 2007.  This page refers to Xara Xtreme Pro v3.2 being the latest version of the software, but it has been replaced a few times and as of February 2016 the current version is Xara Designer Pro X11.

I use Xara Xtreme Pro virtually exclusively for all design work. This page gives a little detail on the evolution of the software through its 15 year life and 6 different names. If you are looking to buy Xara Xtreme, you can compare the two versions and buy from the Xara website by clicking here.

Currently in version 3.2 (released in July 2007), there are two Xara-branded versions: Xara Xtreme and Xara Xtreme Pro. Parent company Magix also produces some other versions, but the ‘pure’ versions are those released by Xara. 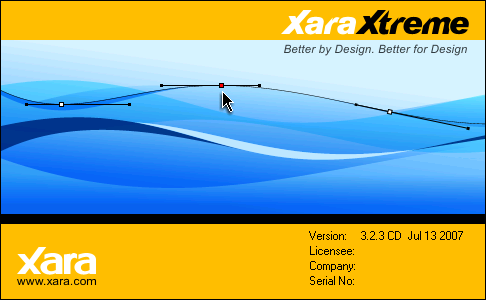 The program has a long and confusing history, having been released under many different names. Originally developed for the Acorn Archimedes series of computers in 1992 under the name “Artworks”, the development company Computer Concepts Ltd rebranded to Xara Ltd and ported their flagship graphics product as Xara Studio in 1994.

After signing a marketing agreement with Corel in 1995, Xara re-released Xara Studio as CorelXARA, but Corel’s priority was less about “marketing” CorelXARA and more about burying it in order to continue to push their own CorelDRAW product. 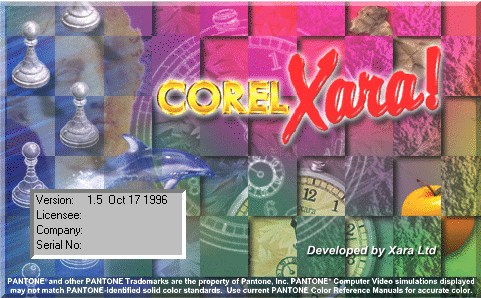 There was only one significant upgrade in the Corel years, much to the annoyance of all Xara fans. CorelXARA v2.0 was released in January 2000 and was to be the final release under the Corel name because Xara soon acquired the rights to market the product under their own name again. 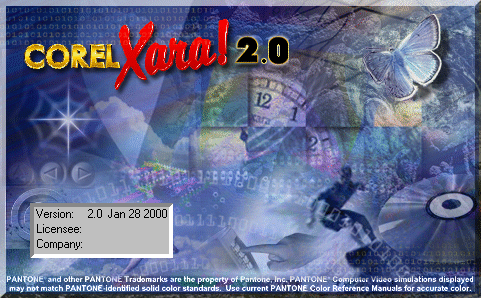 Much to the delight of all Xara fans, Xara X was released towards the end of 2000 without Corel’s involvement and was wholly owned and controlled once again by Xara Ltd. The name “Xara X” was to imply “version 10” since both Adobe Illustrator and CorelDRAW were up to version 10 at the time.

Xara X introduced brush strokes, gave users the ability to give vector objects a bitmap “feathered” edge, supported pressure-sensitive graphics tablets, a (non-animated) Flash export and introduced three new important tools – the Bevel, Contour and Shadow tool. With little doubt, it remains the most significant upgrade of all – bringing many many much-needed features.

For a long time there were no updates to Xara, but in mid 2004 the product re-awoke and there have been steady releases ever since. Xara X¹ was released – a new name which made sense when the predecessor was Xara X, but a little confusing because it was really Xara Xara X¹. Still, Xara customers were just happy to have a new product, they didn’t really care about its name.

Xara X¹, as the name suggests, wasn’t such a massive upgrade. It brought a welcome series of usability and performance improvements and introduced the now familiar “live solid drag” of objects – relegating the dragging of red outlines of design elements to the past. The add-in “Xara Picture Editor” was also introduced, a bitmap-almost-editor application which, while not allowing pixel editing, allowed simple photo editing such as colour and brightness balancing, cropping and red-eye reduction. XPE was penciled in for a release as a standalone product to replace the standard Windows XP picture viewer, but the release never came.

After Xara X¹ came Xara Xtreme, a name which lives on today. At the same time as Xara Xtreme was released, a new product confusingly called Xara XS was released and given away free online and on the front covers of computer magazines. It claimed a release date of 2005 but really it was released in early 2006, based on the previous year’s Xara X¹ – but with some features removed. It was really a “light” version of the program, given away free, for new users to discover and then use as a reduced-price upgrade path to Xara Xtreme. 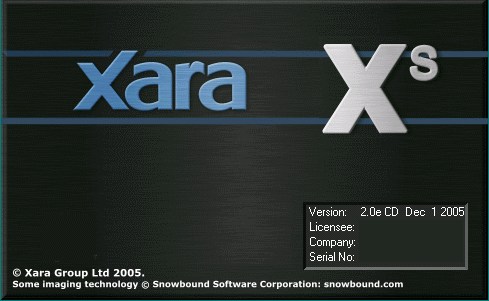 Xara XS – given the version number 2.0e and release date of December 2005

Xara Xtreme brought a new and important feature to its users’ toolbox: a PDF export. While not able to reproduce many of Xtreme’s advanced features, it was certainly a welcome help to export Xara-generated artwork to other applications. Sadly there was no PDF import, but many usability and performance improvements over the now-aging 2004 release of Xara X¹ were welcome. 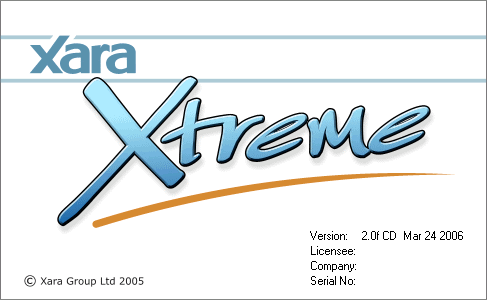 Xara released a professional version of Xara Xtreme, quite logically called Xara Xtreme Pro, in late 2006. The original Xara Xtreme was given the version number 2.0 and Xara Xtreme Pro was given the version number 3.0 – and indeed it brought many new features, most notably multiple-page support, improved text handling, a new animated Flash export, importers for both Adobe Photoshop and PDF formats, and a much improved PDF export. Xtreme was available for a low price and had seen Pantone colour support cut, but this was restored for Xtreme Pro.

At the same time as Xara Xtreme was announced, a new product was announced: Xara LX – an open-source version of Xtreme for the Linux platform. Still in development, completing the port from Windows to Linux is currently stalled because Xara released everything except one central piece of code as Open Source, keeping the last (important) bit back. Work is being discussed about replacing the proprietary code for an open source equivalent, though with the project not being truly fully open source, volunteers are few and far between. Xara, and especially its new owners (Xara announced its sale to Magix at the end of January 2007) are worried about someone compiling an open source Windows version. 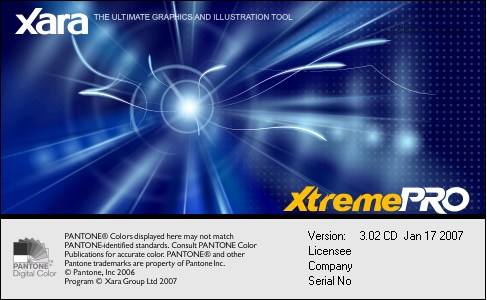 It wasn’t until mid 2007 that Xara Xtreme was to be updated to version 3 – by which time Xara had been bought out by the German software company Magix. Xara Xtreme Pro v3.2 was released as a controversial paid-for upgrade (just a few months after v3.0 was released) at the same time as the entirely new Xtreme [Standard] was released at v3.2 as well.

For Xtreme Pro, the upgrade from v3.0 to v3.2 concentrated mainly on usability improvements but new features including export filters for Microsoft’s XPS vector format, the open source XML based SVG format, and import filters for RTF (including copy/paste support from/to Microsoft Word). Somewhat less welcome was the inclusion of a Magix application called “Xtreme Photo” – a symptom of the new parent company’s somewhat unhealthy obsession with the name “Xtreme” – it is now plastered over all kind of programs which have little or nothing to do with Xara Xtreme.

For Xtreme [Standard], the upgrade from v2.0 to v3.2 included many of the features previously thought as exclusive to the ‘Pro’ version, leaving just the PDF/X and XPS export, multi-page documents, Pantone support and bundled applications of Xara3D and a keyboard shortcut utility as the main differences between ‘Standard’ and ‘Pro’ editions. Still priced at just US$79 (less than £50), it represents absolutely fantastic value.